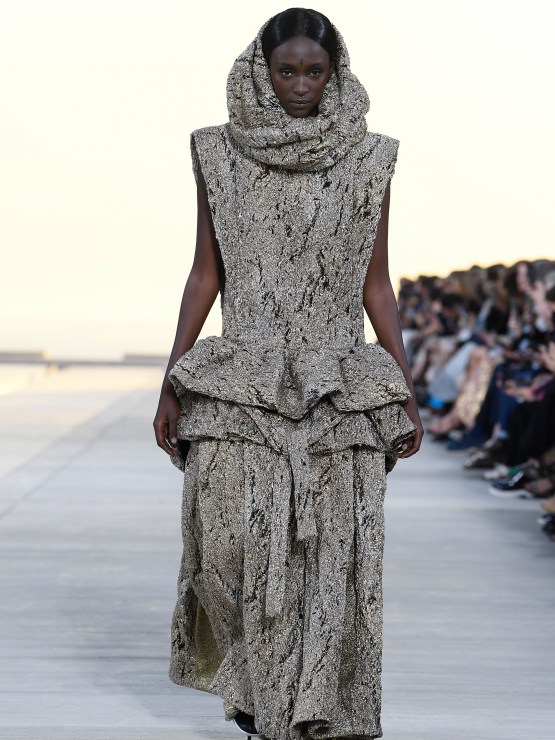 Just before sundown on Thursday as the Louis Vuitton resort collection was ready to debut in the plaza of the Salk Institute of Biological Studies overlooking the Pacific Ocean in La Jolla, California, all eyes turned skyward to look at a flock of rambunctious seagulls chasing the camera drones hovering over the runway.

Nature does put on a good show.

Which is one reason why Nicolas Ghesquière was drawn to California once again to present his resort collection for the French fashion house. That and the dramatic Brutalist architecture of the research institute founded by vaccine pioneer Jonas Salk and designed by architect Louis Kahn.

The mirror-image blocky concrete buildings with a trickling “River of Life” running through the center plaza, and out to the ocean beyond, made for a superbly scenic backdrop, which is really what resort shows are all about: the photo op.

Ghesquière’s runway gestures were equally grand. The collection was inspired by the California landscape, desert nomads and surf rats, with his signature sci-fi cinematic touches right at home against the stark sunset vista. 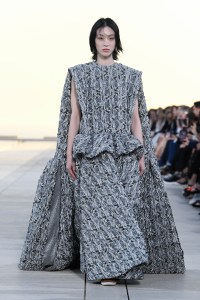 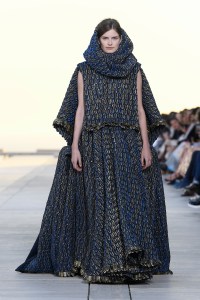 “We decided to write in the text that the guest of honor is the sun — we went at two or three different times of the day, and I wanted the clothes to interact with the light. It’s a very simple principle, but also so important how you protect yourself in this day of global warming,” Ghesquière said during a preview of the Sun Ra-meets-skater park collection, with goddess robes and draped linen skirts, water sports’ vivid graphic and spray colored crop tops, close-fitting jackets and sneaker booties.

Ghesquière was eager to discuss materials and textures, and they dazzled, from molten lava jacquards to glam fish scale-like sequins to prints made from photographs of the Salk Institute buildings taken using thermal cameras.

On the one hand, his designs can sometimes be hard to digest, so fantasy-like that they border on costume, and with seemingly little consideration to how a woman might feel wearing a metallic jacquard ceremonial robe adding so much heft and girth, for example, or a bolero resembling a paraglider, dripping crystal fringe, as cool as that was.

Then again, why are we wasting time with a fashion runway if it’s not going to challenge our perception, pushing the now-ubiquitous crop top in a more glam, sculptural and ornamental direction, or conjuring Lawrence of Arabia by way of the yoga studio, with wrapped linen tunics and half skirts layered over stretch pants and sneakers?

There was plenty to spark the imagination and enough street-ready pieces, too, like the gold cargo pants, ribbed metallic knit camis, glittering criss-cross bandage tops and hulking steel-toe combat boots draped in silver chains, that will no doubt be coming to a celebrity Instagram feed soon.

After Ghesquière took his bow, rather than running for the exits, the crowd — including Ava DuVernay, Ana de Armas, Léa Seydoux, Chloë Grace Moretz and many more — rushed to the cliff’s edge to capture selfies as the sun dipped below the horizon. The show wasn’t over yet.